The Kosher Channel
cook with love, eat in joy
Menu
< 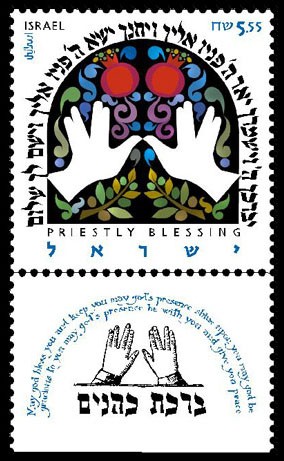 "…the first of your kneading you shall set aside as challah …(so) shall you give a portion to Hashem for your generations" (Bamidbar 15:20-21)

What is challah? Challah is known to most of us at the two braided Shabbat loaves we delight in after Kiddush on Friday night. In halachic terms, challah is a mitzvah in the Torah to separate a portion of dough from the baker’s batch. Any dough meeting the requirements for hafrashat challah , taking challah, must have this portion removed, or the bread baked from this dough is not considered kosher.

In Temple times, the separated portion, the challah, was given to the Kohain . The Kohanim were deeply involved in their service in the Temple, and were therefore unable to fully provide for their families. Hashem commanded us to give His portion, challah, among other gifts, to the Kohanim. This ensured their sustenance as they performed their holy work on our behalf.

Today, the Temple remains central to our identity as a people. Observing the mitzvah of hafrashat challah, then and now, establishes a bond between the people and the Kohanim. We immortalize this interdependence when we remove this piece of challah dough, burn it and dispose it in an honorable way.

We, like the Kohanim, depend on Hashem for physical sustenance in order to perform our mission in life.

Many Jewish women make it a priority to bake their own challah each week, particularly on erev Shabbat, just to perform this mitzvah of taking challah. Why is it so important to them that we make the time to “take and bake” when delicious kosher challah is readily available? And what is so propitious about performing this mitzvah on (I’m so busy then!) erev Shabbat? Finally, why is this a Jewish womens' mitzvah? 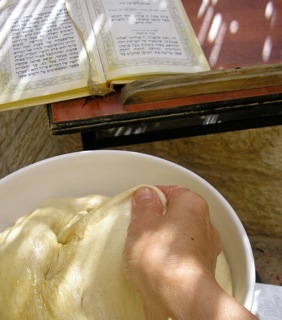 When G-d created man, He gathered together the dust of the earth, mixed it with water and made a “dough.” Then, He removed a portion, elevated it and named this portion "Adam." The Midrash calls Adam "The challah of the world.” Finally, Hashem breathed His Divine spirit into Adam, bringing the purpose of His entire creation into existence.

Now observe the baker. After mixing and kneading her mixture of flour and water, she removes a portion of her dough, elevates it and says, “This is challah.” With this statement she acknowledges that the dough-and all things physical-are a creation of Hashem’s. She recognizes that we are given bread, food and material sustenance, in order to fulfill our role G-d's world. 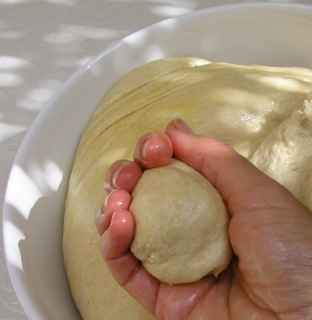 G-d extracted a "handful" of earth from the dust and water He combined and created Man. Similarly, we separate and elevate a handful of dough from the simple ingredients we combine. Prior to taking from this mixture, there is nothing to distinguish the portion destined for separation and sanctification from the whole.

Our purpose is to take the gifts G-d gives use them to serve Him, thereby we elevate the world. We can only elevate something that is first completely of the material world. Adam, the pinnacle of Creation was extracted from the earth and imbued with the Divine spirit; this sanctified Hashem’s entire world. Challah, the first and the best, is taken from dough and the bread baked from that batch becomes kosher.

It is interesting to note that the Hebrew root of the word challah is “chol,” which means ordinary. Just as separating challah dough makes the bread edible, the purpose of the Jew-to make the "chol" holy, requires our involvement in it, and also our separation from it.

A Mitzvah Precious to Jewish Woman

Hafrashat challah is considered one of the three special mitzvot Although men also bear responsibility for taking challah, women are more closely identified with it. This is because our domain is the home, where challah is taken. It is also because we have a remarkable opportunity to make reparation for our part in influencing Adam, the challah of the world, to sin.

Hashem created Adam on Erev Shabbat*. It was both the pinnacle of Creation and the disaster of our downfall. Adam violated his single mitzvah on that same day, causing G-d to “hide Himself,” concealing His presence within the physical world. At the nexus of this sin was woman.

Judaism teaches us that time is much like a spiral. Every erev Shabbat lines up with every other erev Shabbat since that very first one. Therefore, I find this is an opportune time to tap into this eternal circuitry and make a tikkun, rectification. A Jewish woman taking challah, especially on erev Shabbat, restores the honor we helped diminish, and invites our Heavenly King to reveal His presence in our home.

Like the braids of the Shabbat challah, may this mitzvah be intertwined with your purpose on this world:  to     elevate the work in our lives by making it holy, thereby infusing all our actions with potency, meaning and vitality.

* The Sages wrote that a woman "should try, at least once a year, to bake her own challah and fulfill the mitzvah of separating the challah from the dough with a blessing (important info here). The appropriate time (Ben Ish Chai) to do this is during the Ten Days of Repentance, between Rosh Hashanah and Yom Kippur. These are the days of rectifying the mistakes we have made in the year and we can also atone for the generations before us.

NOW you are almost ready for The Challah Recipe. But before you actually make challah, you'll want to know about the laws of taking challah.