What is Lag b Omer?
what do we do on this Jewish holiday?

The Kosher Channel has great Lag b Omer recipes but first, you might want to first know the answer to a burning question:

Literally the 33rd day of counting the Omer, it is a day of rejoicing in the midst of a time of mourning.

The omer is counted during the 7 weeks called sefira between Pesach and Shavout. Jews count each day and work on improving middos, character traits-there by making each day “count.” During this time we are preparing ourselves to re-live the day we were given the Torah on the upcoming holiday of Shavout.

Days of Mourning turn to Joy

These are days of mourning because of a tragedy that still effects us today. It was during sefira that a plague took the 12,000 pairs of students of Rabbi Akiva. Imagine how we’d be different had these thousands of illustrious scholars continued as the foundation of our mesorah! Imagine the exponential effect they could have had on K’lal Yisrael. But because of they did not act respectfully to one another, all was lost to us. We use this time to find ways to strengthen our Ahavas Yisrael, our love for one another.

We celebrate because the plague finally ended on Lag b Omer. It may seem that after such a devastating loss our response would be the opposite of joyous. Our joy is that Rabbi Akvia was able to rebuild. This time, with only five students, but among them was the great Torah teacher, Rabbi Shimon Bar Yochai.

Reveling in the Revealed

It was again, during this time period, that Rabbi Shimon bar Yochai passed away. Sages say that the day by commemorating the day of a righteous person’s death we continue the impact their deeds have on our lives. Rabbi Shimon bar Yochai revealed deep secrets of the Torah in the Kabbalah, therefore his yahrzeit is a joyous event, a day we celebrate the noble, rich gift of his legacy to us.

What do we do on Lag b'Omer?

Celebration, picnics, weddings~ As restrictions of mourning are lifted on this 33rd day of the Omer, weddings, parties, listening to music, and haircuts are commonly scheduled to coincide with this day. While the Ashkenazi minhag, custom is to cease all signs of mourning on Lag b Omer, the Sephardi minhag is to continue mourning practices through the 33rd day of the Omer and celebrate on the 34th day.

Bow and Arrow~ The shape of the bow reminds us of a rainbow. It is said that when Hashem shows a keshet, rainbow in the sky, he reminds us that He has reason to destroy the world, but is holding back. In the days of Rabbi Shimon bar Yochai, a rainbow never appeared, indicating the merit of that generation.

Prayer is compared to a bow and arrow. In a prayer full of kavana, intent, we pull towards the heart and direct our prayers upward as if we are an archer. Lag b Omer is a day, it is said, that our heartfelt prayers hit their mark. The beginning words of “shema kol tefilaseinu” “hear our prayers, spells “keshes, rainbow.

Indeed, Tachanun, the prayer for special Divine mercy on one's behalf is not said on Lag b’Oemer. On this day God is showing one a "smiling face," so to speak, as He does especially on the holidays; there is no need to ask for special mercy. 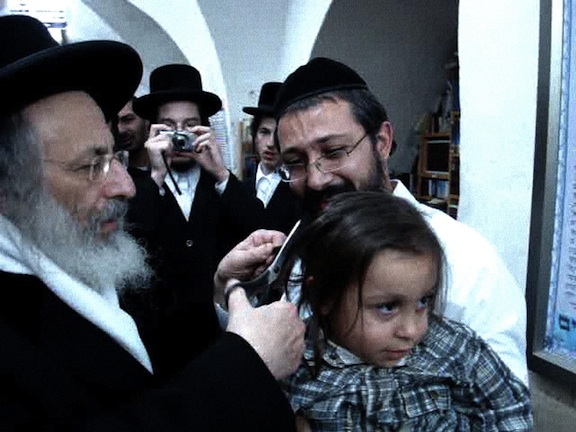 First Haircut~ Parents wait to cut their son’s hair until he reaches age three based on biblical verses that compare man to a tree. Just as a tree matures from a tiny seed to fruit-bearing tree, likewise a child grows more knowledgeable and is able to do mitzvos. Just as the Torah requires newly planted fruit trees be allowed to grow unharvested for three years, a child's hair can be left uncut for three years.

It is a custom at the Meron celebrations, dating from the time of Rabbi Isaac Luria, that three-year-old boys are given their upsherin, first haircuts while their parents distribute wine and sweets. The upsherin marks the child's entrance into formal Torah learning.

~ We light bonfires on Lag B’omer is because when Rav Shimon Bar Yochai revealed the secrets of the Torah to us, he brought enormous light to the world. In his passing on the 33rd day of the Omer, he left behind this spiritual light. The custom of lighting fires symbolizes this revelation of the powerful light of Torah. 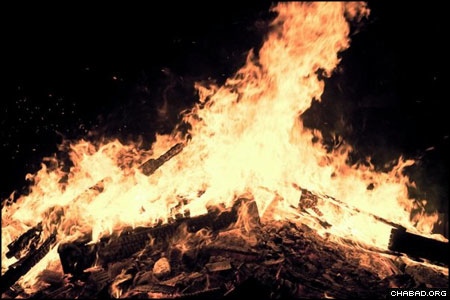 Bonfires are the most well known and anticipated of Lag b’Omer activities. It is important to be aware of and practice bonfire safety precautions.